Learning National Best Poverty-alleviation Practices from Pingyu: Can We Replicate the Practice in Africa too?

The Nobel Prize for Economics in 2019 awarded three economists engaged in random controlled experimental research on recognition for their contribution to poverty alleviation. The alleviation of poverty is an important theme in Development Economics, and it is also the top priority for frontier theoretical researchers. In the course Development Economics in ISSAD this term, Professor Zhang Xiaobo, whose main research areas cover Development Economics, Rural Economics and China Economics, discussed the economic development strategies for developing countries with students. In the class, Professor Zhang shared with students the great achievements China has made in poverty alleviation and the rich experience or lesson learned from the developing poverty-stricken areas in China.

Fieldwork can enrich the knowledge learned in class. On the first weekend of November, Professor Zhang led a group of students to Pingyu county to study local poverty alleviation measures. Pingyu County is located in the southeast of Henan Province and suffered from poverty for years. The GDP per capita of Pingyu is only 22,777 RMB (about 3,200 USD) in 2018, 1/3 of that nationwide. In recent years, Pingyu County has actively attracted investment and developed five pillar industries. Pingyu County has achieved brilliant achievements in poverty alleviation and its economic growth rate is about 8% per year, ranking the forefront of the province. Pingyu has been said to have one of the best practice of poverty alleviation nationwide, is it possible we replicate those experiences into developing countries? With such questions, the delegation began two-day field research.

On arrival Pingyu, the County Mayor Zhao Feng, on behalf of all government officials, gave a warm to ISSCAD visitors. The delegation then began the research trip on the first afternoon. 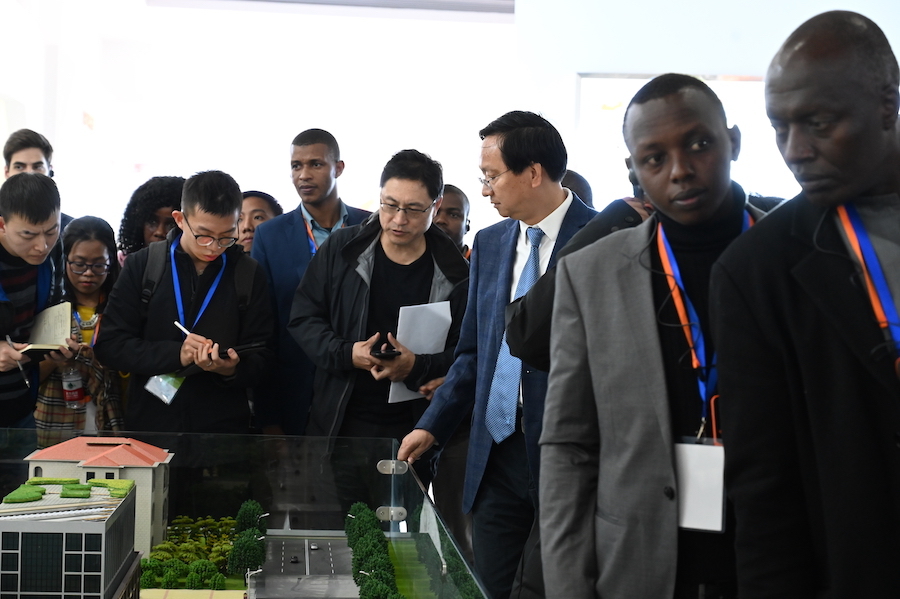 The delegation first visited several firms in the Pingyu Industrial Park. In the process of inviting investment, the local government made full use of various resources. A large number of aborigines have gone out to work in the waterproof industry, and many of them have become entrepreneurs. Utilizing such return-home-entrepreneur resources, Pingyu introduced the Lanling, a company specializing in producing waterproof materials whose boss’s hometown is Pingyu. The delegation inspected the advanced entire automated production line. Located in the central region, the labour cost is relatively cheaper in Pingyu, and therefore it has undertaken industrial redistribution from coastal provinces. The delegation visited Zhongxin Furniture, an outdoor leisure product manufacturer, and the Pagani Leather, a high-end leather goods manufacturer. They are both from Zhejiang Province and moved to Pingyu. The booming industrial economy has become an important driving force for the development of the county economy. 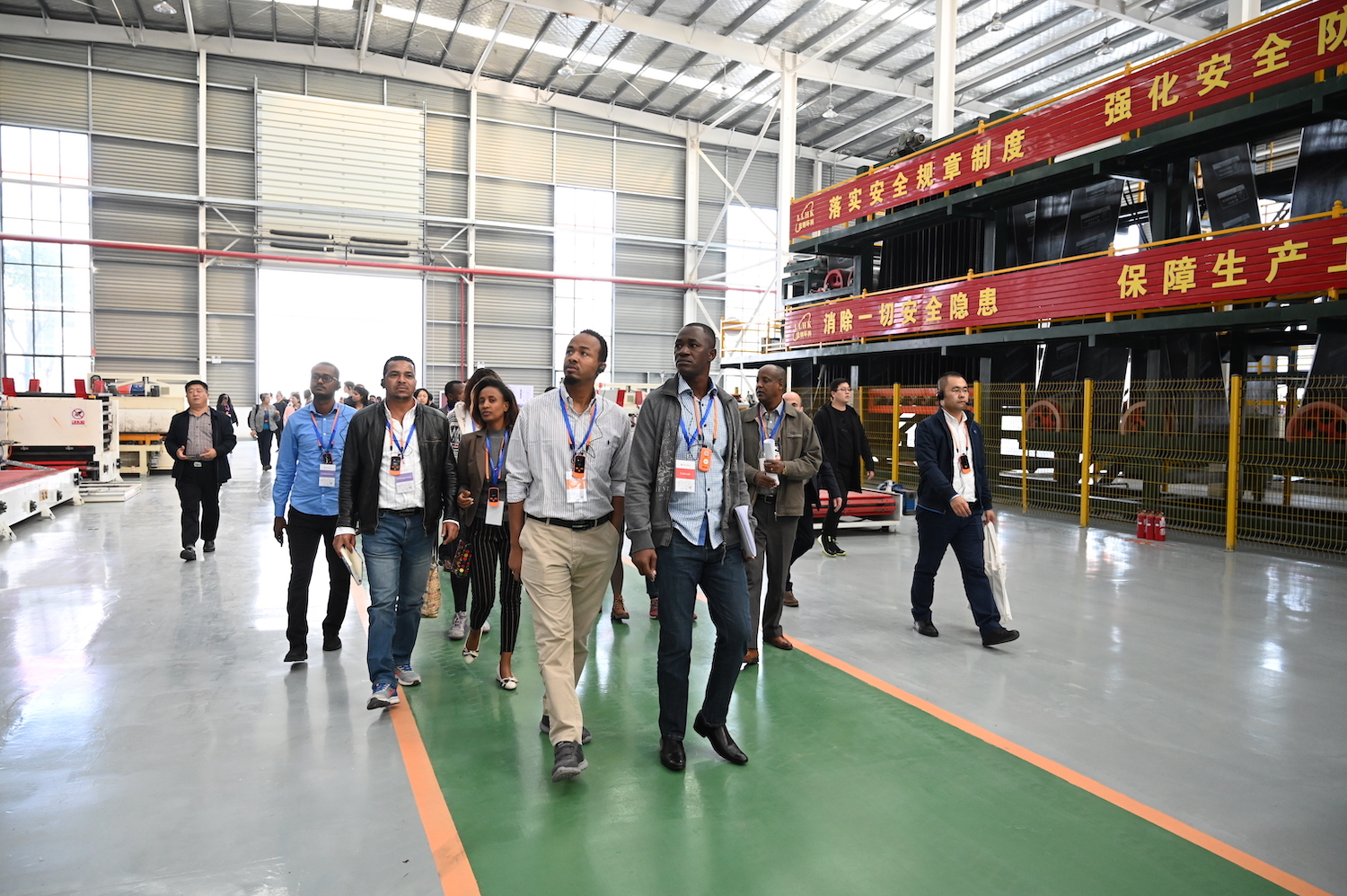 The delegation then visited the local rural workshops. The rural workshop is the infrastructure of the rural factory invested by the county government. After the completion of the project, the outside leisure furniture enterprises, introduced into the county towns, are guided to cooperate with them. Rural workshops attract idle labours around the villages and thus lead to poverty alleviation. The delegation visited the rural workshops of several towns, where idle labours produce cane chairs, clothing or tents. The workshops impressed the delegation a lot. The most successful part of the rural workshop in Pingyu is making the best use of the rural idle labour. Most of the young people in rural areas have gone outside to work, while the elderly, women and disabled people are left in the countryside. Their daily main income comes from agricultural production, and the lack of a sufficient and stable source of income makes them poor. The rural workshops allow them to participate in the labour market at home. In terms of working hours, if workers have to undertake housework and pick up children to go to school, they can choose their own work schedule, and they can even take the work home to finish it. In terms of labour skills, the outdoor leisure industries and the clothing Sewing industries do not require specialized labour skills, thus workers can be employed after a little training. In the working population, the elderly, disabled people, who are difficult to find a job in the formal factory, becoming the main force in the production of rural workshops. The rural workshop is a poverty alleviation policy with hematopoietic function. 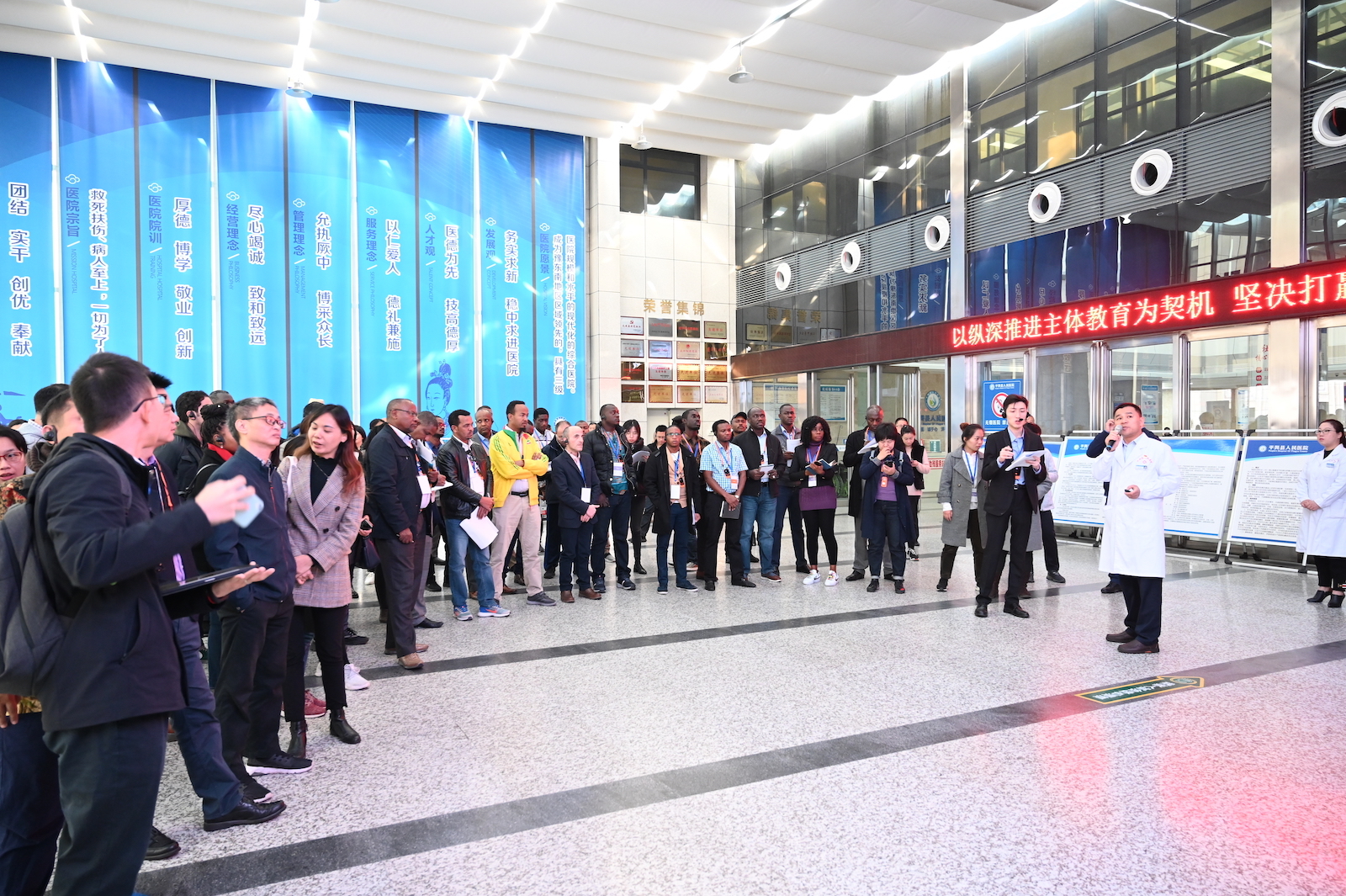 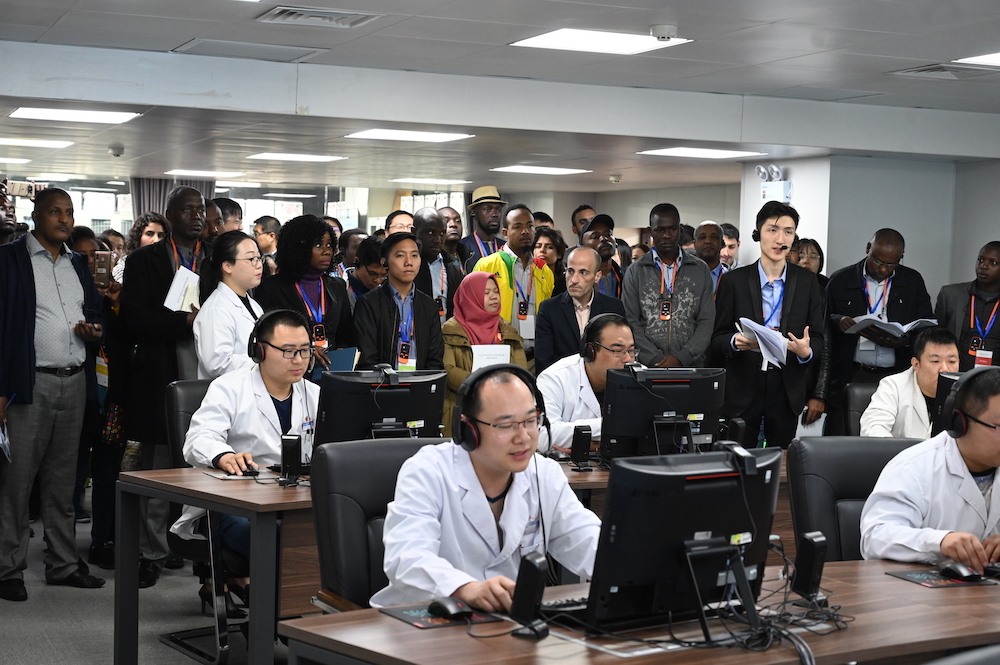 Health and retirement are also what ISSAD visitors concern. The delegation also visited local hospitals, nursing homes, and encomiums. For old and disabled people, local government provides various modes of care: (1) For the elderly who are over 60 years old and have lost their ability to work and but can take care of themselves, the government invites them to live in the nursing home for free. (2) For the disabled who are unable to take care of themselves, the county asks them to go to the town health centre and pays for the resettlement fee. (3) For the elderly who have no children, but have certain labour ability and can take care of themselves, the county government invites them to live in the centralized resettlement site free of charge, where they can simply plant crops and raise some livestock. In recent years, Pingyu pays special attention to medical poverty alleviation and tries to ensure that people do not suffer from poverty due to illness. At the Pingyu County Rehabilitation Center, the delegation saw a rehabilitation teacher doing one-on-one rehabilitation work for the disabled. In township hospitals, telemedicine has obtained more professional medical services for sick people. All these health cares are covered by public health insurance.

Modern agriculture also attaches much attention to the ISSCAD visitors. The delegation visited the "Blue Sky Sesame Town". The project combines three basic industry together. The white sesame plantation there is famous all over the country. Pingyu is an important white sesame planting base in the country. The local sesame oil has a high oil yield and the edible sesame protein content is high. The second industry refers to the deep processing of sesame, such as the production of edible sesame food. The tertiary industry uses local sesame culture to develop tourism. Sesame Old Street and White Sesame Culture Museum make it an idyllic complex of “agriculture, tourism, literature, business, and health”. "Central Plains’ cereal ranks first, among which the Pingyu Sesame is the King", "Blue Sky Sesame Town" is the county’s beautiful business card. 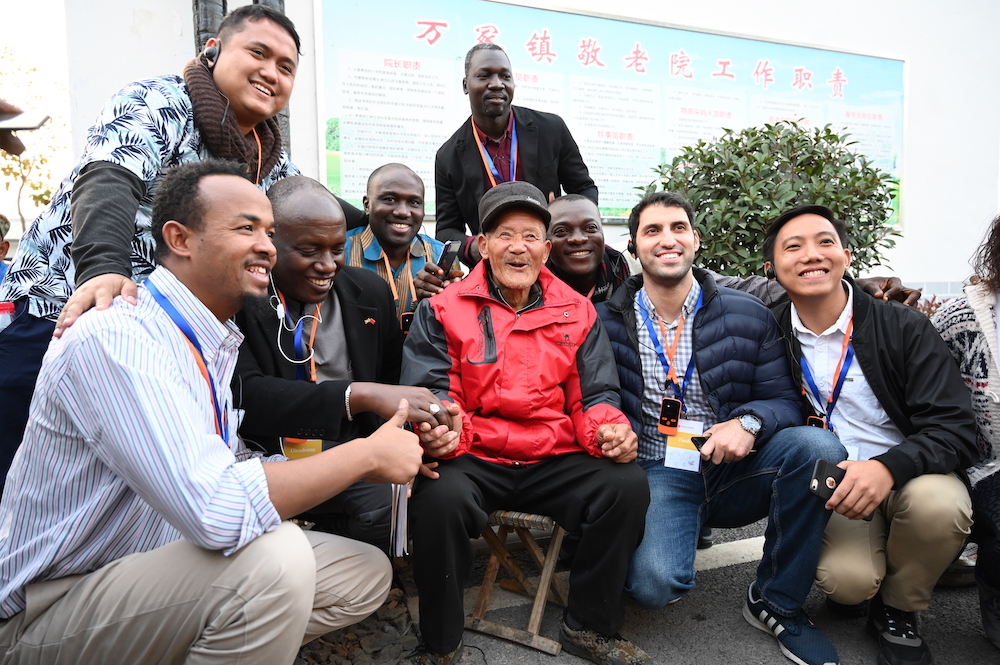 From the rural workshop to the field, from the industrial park to the entrepreneurial base, the delegation actively studied Pingyu’s successful experience in county economic development and poverty alleviation. During the period, the students recorded their findings in notebooks and recorded the impressive images on their mobile phones. After the investigation, the delegation and the leaders of the county committees held an exchange meeting. The students of the ISSCAD delegation rushed to ask questions on the scene to learn more about Pingyu County's industrial advantages and innovation, future development planning, policy support, poverty alleviation and industry poverty alleviation projects to promote poverty alleviation, social security, health care, the introduction of talents, urban construction and other aspects.

This trip has greatly stimulated ISSAD students’ interest in development issues and inspired them to think further. Pingyu is a good model in inviting industry and alleviating poverty. First, The success of the Pingyu model originates first from the county government's successful investment promotion of the outdoor leisure industry. It is Pingyu's experience in inviting investment that the government should combine new industries with local existing industries, rather than introduce industries that are not related to the local condition. The important resource of Pingyu in inviting investment is 250,000 migrants all over the country. In the early years, most of them went out to work in waterproof labour services. Later, some of the successful business people became labor service enterprises, waterproof material manufacturing enterprises, and entrepreneurs in other industries. They are familiar with Pingyu's county conditions and share the ambition of building the hometown. They are a dependable resource for introducing investment.

Second, the success of Pingyu model also depends on the government's preferential policies and supporting measures for enterprises. The local government formulates special industrial policies in response to the needs of enterprises and local shortcomings. Outdoor leisure companies produce for the European and American markets, while inland relocations need to consider convenient transportation and logistics costs. Therefore, the government's preferential policies for enterprise logistics, such as the special train and logistics subsidies, are targeted to complement its own disadvantages.

Last but not the least, the success of Pingyu model in poverty alleviation work is a new thinking model, transferring from directly subsidizing poor households to providing them with jobs. The establishment of a rural workshop has enabled poor households to find employment at their doorstep. At the same time, this model directly provides labour for enterprises and solves the employment problem of enterprises. The mutual-benefit method deserves more academic attention.

To find a development path that suits each developing country is a difficult but meaningful task. Solving these questions is the unremitting pursuit of every ISSCAD student. The trip to Pingyu is just a beginning, and they will conduct more investigation in ISSAD learning period. 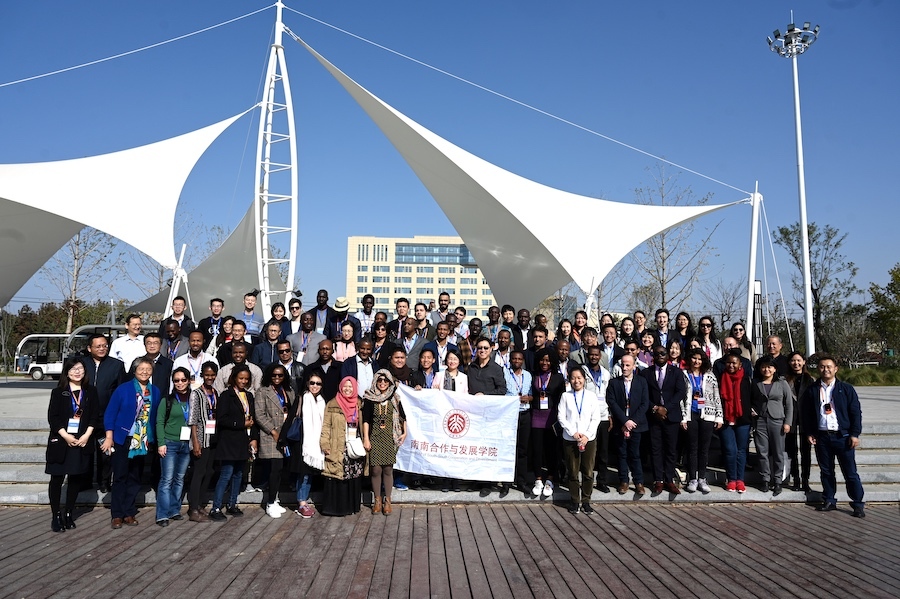