In 2012 the Chinese government set a long-term goal: build China into a fully developed and prosperous country by 2049, 100 years after the founding of the People’s Republic. Given its success since the beginning of economic reform in 1978, this kind of transformation is certainly possible. But it is difficult and not guaranteed.

Furthermore, China’s external economic relations have become contentious with a number of major partners, resulting in growing trade and investment barriers in both directions. Our book,  "China 2049", examines the policies that can help the country achieve this ambitious goal.

The COVID-19 pandemic has been a reminder that there will be many unpredictable events between now and 2049. But one thing is certain: China will have a rapidly aging population. Total fertility has dropped to 1.7 births per woman, far below the replacement rate of 2.1. This decline may have been helped along by the one-child policy, but relaxing it did not produce more babies. China is like many other densely populated Asian countries, with high housing and education costs, where many couples choose to have one child, or none. Even some increase in fertility would not affect the labor force for 20 years.

China’s population may have already peaked. More important, the working-age population has already started to decline. The elderly population is expected to increase dramatically in the next few decades (see Chart 1). The over-65 cohort will more than double to 400 million people by 2049. Especially striking is that the "old-old", 85 and over, will more than triple to about 150 million people, surpassing their peers in the United States and Europe combined. The only working-age bracket that will increase is the 55- to 64-year-olds. 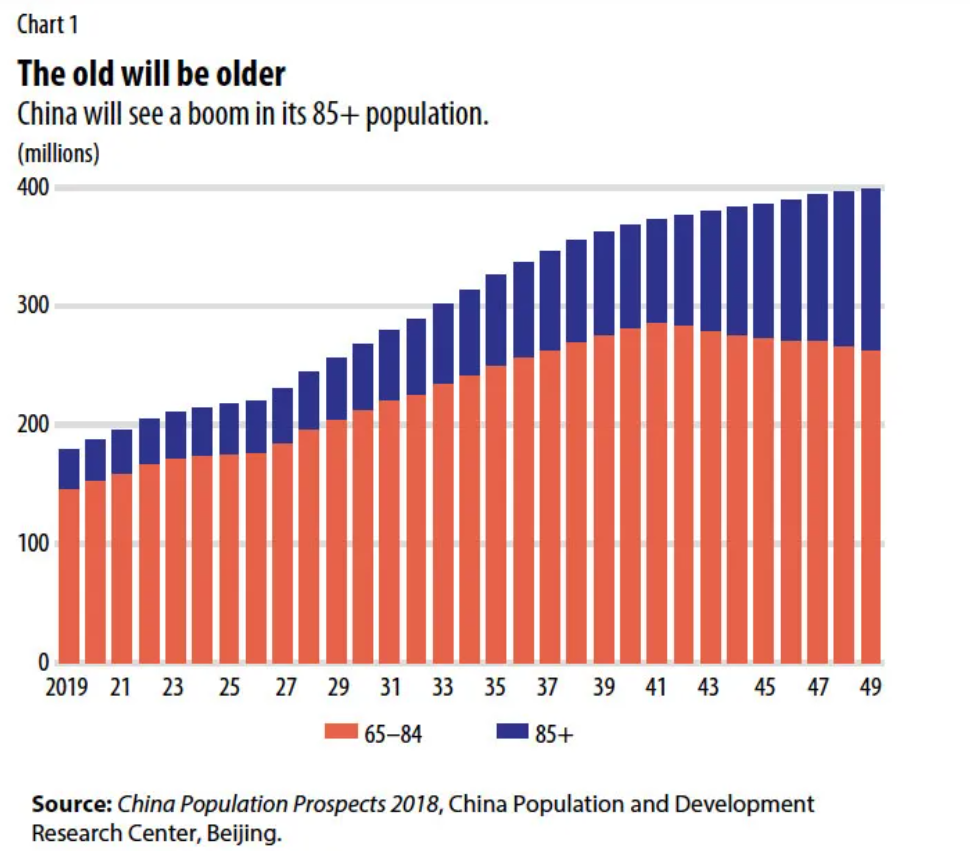 This population aging is both a social and an economic issue. Taking care of the elderly will require devoting more resources to health care, long-term care, and assisted living. Traditionally, the elderly are cared for by their children. But, with smaller families, many elders could end up with no one to rely on. It makes humane and economic sense to socialize costs that previously were privately borne.

The COVID-19 pandemic has revealed both the strengths and weaknesses of China’s health care system. The pandemic was brought under control with a huge ad hoc mobilization that shifted scarce resources to where they were needed most. But many Chinese now feel the need to strengthen the health care system and resource it adequately. This is especially true in rural areas, where many of the elderly live.

Although challenging, the working-age population decline need not presage a dramatic drop in the labor force, depending on what happens with participation. Retirement age, in particular, needs to be reformed and gradually increased: male civil servants can retire at 60, female civil servants at 55. Many people over 65 choose to continue to work if they are healthy. Family-friendly policies can sustain and enhance female labor force participation.

China’s 40 years of reform and growth have coincided with steady urbanization. The urban population has been increasing by 1 percentage point a year, from 20 percent at the beginning of the reform to 60 percent today. That includes more than 200 million urban migrant workers still registered as rural residents under the  hukou  household registration system. This migration has been an important source of dynamism and productivity growth in the economy. But migrants face various constraints. If laid off in a downturn, they are expected to return to their rural village. It is difficult to bring children or parents along when migrants move to cities where they do not have full access to social benefits (education, health care, pensions). The result is divided families with parents working in cities while grandparents maintain the family farm and raise the children left behind.

The restrictions on urban registration are gradually being dismantled, especially in smaller cities. Jiangxi province recently scrapped these restrictions. But controls are still strong in the largest centers with the highest productivity, such as Guangzhou and Shanghai. Despite this migration, the ratio of urban to rural income rose steadily. By 2007, urban workers were making 3.14 times as much as those in rural areas—one of the highest levels of rural-urban inequality in the world (see Chart 2). China has about one-fifth of the world’s population but only 7 percent of its arable land, making it difficult for 500 million people to live well off the rural economy. Even including rural migrants, China’s urbanization rate is low relative to the country’s per capita income and population density. Fast-growing Asian economies such as South Korea had urbanization closer to 80 percent at this stage of development. It is encouraging that the disparity has come down over the past decade, but it is still high, with urban workers making 2.71 times more.

China would benefit from fully scrapping the internal migration restrictions. On the social side, the rural population is disproportionately composed of children and elderly people. Schools are much better in cities, allowing the workforce of the future access to better education. While some elders will prefer to remain in rural areas, others perhaps would like to move to cities closer to their adult children and to high-quality medical care. Economically, there is still an excess supply of workers in rural areas, and easier migration policies would help maintain the urban workforce.

An interesting paradox of China’s success is its rapid growth despite an underdeveloped financial system. An index of “financial repression”—based on ownership of banks, regulation of interest rates, intervention in credit allocation, and control of cross-border capital flows—shows China to be one of the most repressed among major economies, similar to India. It ranks as moderately more financially repressed than Russia and South Africa and considerably less liberalized than advanced economies. Almost completely controlled until the 1980s, the Chinese financial system made good progress toward liberalization until about 2000, but has stalled ever since.

Our interpretation is that the initial steps in liberalization were sufficient to carry out the straightforward task of channeling the country’s high savings into export-oriented manufacturing and housing. A moderate amount of financial repression can be helpful at this stage of development to ensure that the cost of capital remains relatively low. In both these sectors, lending depends on physical collateral (property, buildings, machinery), so allocation is not that difficult. China’s exports come largely from private firms, not state enterprises. Real estate development and housing ownership are also private. So a policy that encouraged exports and real estate was indirectly a policy that channeled resources to the private sector.

The period between accession to the World Trade Organization, in 2001, and the global financial crisis, in 2008, was the golden age of China’s growth. There was rapid credit growth, but sufficient GDP growth to keep metrics such as the ratio of nonfinancial corporate debt to GDP stable. This all changed in 2008. To maintain demand in the wake of the global shock, China invested massively in infrastructure by lending to local governments and upstream sectors such as steel that tend to be state-dominated.

At the same time, the central government decided to channel more resources into key state enterprises, hoping to help them become global champions. The surge in lending to local governments and state enterprises caused overall indebtedness in the economy to grow at an alarming rate, showing that the financial system was not performing well in the new environment. If the financed investments had produced strong growth effects, the debt-to-GDP ratio would have remained stable or risen more slowly. A rapidly rising leverage ratio is a sign that poor investments are being financed.

In recent years, the weakness in capital allocation is also underscored by the stalling of total factor productivity, which measures productivity growth not explained by labor or capital increases. In the early 2000s, following significant direct investment that helped build up the domestic private manufacturing sector, total factor productivity grew 2.6 percent a year, accelerating to an impressive 3.9 percent in the later part of the past decade. Since the global financial crisis disruption, it has never recovered, growing only 0.2 percent a year between 2015 and 2019.

Stagnant productivity is a signal that China needs more innovation, and a diversified financial system to support it. China has many of the ingredients that contribute to innovation—a large domestic market; high spending (2.4 percent of GDP) on research and development; millions of scientists, engineers, and software developers graduating every year; and gradually improving intellectual property protection. Still, innovation output is inconsistent. There are some impressive areas of technical advancement, such as fintech and artificial intelligence, but productivity growth for the economy as a whole is weak. The state still channels a lot of resources to its own enterprises, whereas most patents are generated by private firms.

The financial system does a better job of funding firms with traditional assets (buildings, machinery) rather than dynamic start-ups built on intellectual property. As China fine-tunes its next five-year plan, it should focus on strengthening the innovation ecosystem, including its financing, rather than supporting particular industries and technologies. Innovation will be the key to meeting the country’s environmental goals, especially the target of zero net carbon emissions by 2060.

China’s ability to catch up with advanced economies in GDP per capita depends on continued integration into global trade and investment. It went from virtual self-sufficiency to being the world’s largest trading nation and, last year, the largest recipient of foreign direct investment. The current international environment is challenging, however. A bad dynamic has emerged in which China’s plan to develop leadership in specific technologies worries its partners, which in turn place trade and investment restrictions on Chinese tech firms. There is a danger that China will turn inward, following its “dual circulation” program, which emphasizes domestic demand and national innovation. Technological decoupling would hurt not only China but also global productivity growth more generally.

A countervailing trend is China’s recent membership in major economic agreements, such as the Regional Comprehensive Economic Partnership with countries in the Asia-Pacific region and the Comprehensive Agreement on Investment with the European Union. China has also opened a dialogue with members of the Trans-Pacific Partnership about future membership, which would require significant reforms, such as limits on state enterprises and subsidies and opening up new sectors to foreign investment. China has also made overtures to the Biden administration concerning reduction of trade and investment barriers between the two economies.

In Conclusion, China is at an inflection point in its external economic relations. It makes sense for the country to continue opening up its own economy and negotiating trade and investment agreements in all directions. But success or failure will depend primarily on addressing its domestic challenges. The aging population and the rural-urban divide are interrelated: more integration can help meet the needs of the growing elderly population and prevent an unnecessarily sharp decline in the urban labor force. Financial reform and innovation policy are interrelated as well. Moving away from targeted industrial policy toward more general support of innovation calls for a diversified, competitive financial system that no longer favors state enterprises. Innovation will be the key to eliminating carbon emissions without compromising productivity or living standards. 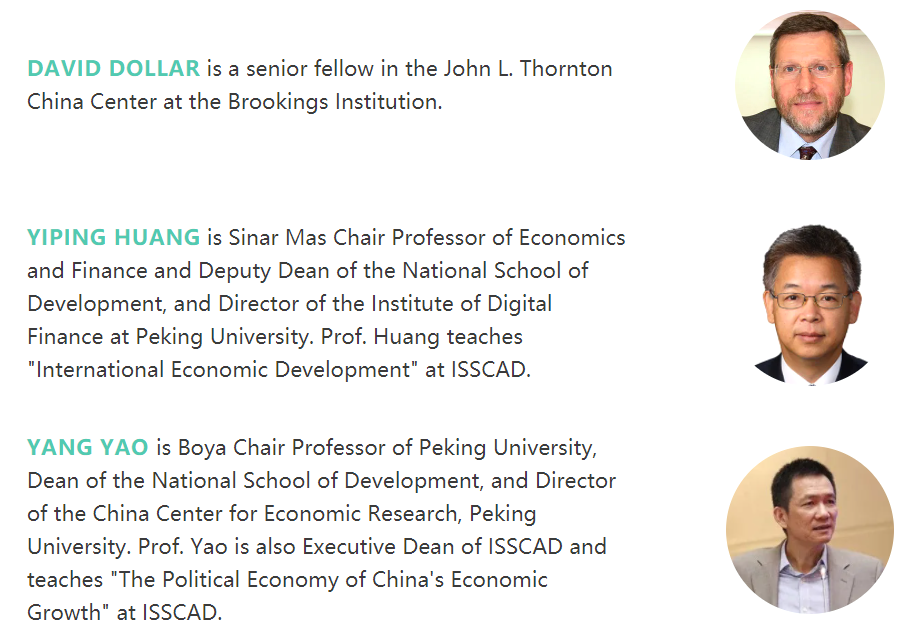