Good evening. I’d like to welcome our new students of Class 2021 of ISSCAD. This will be a landmark in your journey for pursuing how to make a country turn from poverty to prosperity. On this special occasion, I’d like to share with you about some of my understanding about one very important paradigm that has been proposed by the Chinese government and received a lot of attention internationally.

What’s the reason for China to make this new statement?

The first reason obviously is COVID-19. With the hit of COVID-19, almost every country retreated from their development, locked down their cities and borders and slowed down their economic development. As a large trading country, certainly China will be affected seriously. China has been the first country to recover from the crisis. While the production in China continues, the export market becomes smaller, so we need the domestic market to digest and consume all this production. The other reason is the tension between Chinese and the United States. With the extraordinary custom duties inhibiting China’s export to the US market, China surely needs to rely on domestic market to continue the growth. More importantly, the new statement reflects the basic principles for a country’s development. Although China was reckoned as an export-oriented country, but by the time of 2019, one year before the new statement, 82.6% of the GDP produced in China was consumed domestically. Due to the large economy scale and fast-increasing service section’s percentage and resident income, by that time the domestic circulation and market has been the main body of Chinese economy.

This new statement is important for the world, and for domestic economy as well. In the past, internationally, China was perceived as an export-oriented economy, therefore used to be accused for the global imbalances and US’s trade deficits. Not only internationally, but also domestically people think China adopted an export-oriented strategy before and, as such, external shocks will affect their confidence about China’s future development. However, in fact the domestic market is the main body of Chinese economy. As long as we can do our own work well, no matter what uncertainty or challenge comes globally, China can maintain the course of development. Just like if you are a small ship in the ocean, any kind of storm is going to hit you hard and may overturn you, but if you are a big ship, you can go through any kind of storms.

Nevertheless, the old statement of relying on domestic and international markets and resources for China’s development is as important as in the past. The economic growth in a country depends on its continuous technological innovation and industrial upgrading. The new structural economics provides the answer to make it successful, that is, to follow the country’s comparative advantages in the process of technological innovation and industrial upgrading. For China, to export goods with comparative advantages and to import goods without is the way of sustaining dynamic growth. That’s the reason why the new development paradigm on the one hand highlights the domestic market as the main body of Chinese economy, while on the other hand emphasizes on the reinforcement of the domestic and international circulation.

I think this statement has several important implications for the world.

The first one is that Chinese government has a very good understanding of economic principles and the economic situation in China, and by that certainly we have a confidence on its policies and China’s continuous growth. No matter what kind of global situation we face, as long as we can do our own work well, we can continue to grow dynamically, and we will continue to deepening reform and expand international cooperation. If China can continue to grow, it will be an anchor for the world.

We all made the same mistake. Now I understand the secret of the failure of my countries in the past, and I know the secret of failure in my fellow elites’ countries. I still do not have a theory that can ensure you to be successful. But through the exchange of experiences and ideas here, you have a chance to find a way to make your countries as successful as China in the past 40 years, and if you are as lucky as I am, you may see your country transformed from poverty to prosperity in your lifetime. You will see your part in that successful story in your country. 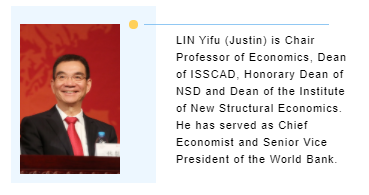