DATE：2022-02-10
Economy
In less than 70 years, China successfully transformed itself from a backward agrarian country into one that is modern and industrialized. As such, the process it has gone through is still fresh in people's minds. What general social, political, and economic development principles have emerged from the rise of China? Shanghai Jiaotong University Professor Wen Yi's latest book – The Code of Scientific Revolution – reveals some of the answers to this question.

In less than 70 years, China successfully transformed itself from a backward agrarian country into one that is modern and industrialized. As such, the process it has gone through is still fresh in people's minds. What general social, political, and economic development principles have emerged from the rise of China? Shanghai Jiaotong University Professor Wen Yi's latest book – The Code of Scientific Revolution – reveals some of the answers to this question. 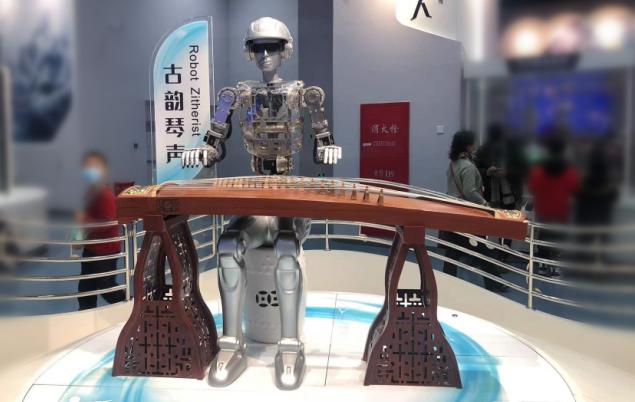 A robot zitherist plays a zither for visitors at the China Science and Technology Museum in Beijing. (File photo)

First, a nation's scientific and technological capabilities stem from powerful state-funded research projects. Wen studied the history of scientific revolution and industrialization in Europe and found that major scientific and technological breakthroughs did not come about via "freedom, democracy, and the rule of law" nor were they simply a continuation of the scientific development that began in ancient Greece but were rather the result of state-funded research projects. Similarly, the underdeveloped nature of science and technology in China prior to the founding of the People's Republic of China (PRC) was not related to a lack of scientific thought or the so-called authoritarianism in ancient China but because of a shortage of state funding. Due to its unknown, expensive and risky features, none of the scientific research work was sustainable without state-funded support.

The "Two Bombs and One Satellite" nuclear and space project, which refers to the development of an atomic bomb and later hydrogen bomb, intercontinental ballistic missile, and artificial satellite and the corresponding tests and launches that occurred from 1960 to 1970, was the result of concerted effort on the part of the Chinese government under the leadership of CPC along with the dedication of people throughout the country. The scientific and technological achievements that have occurred in the People's Republic of China contain the first core secret of the scientific revolutions that took place in Europe, the United States, and Japan after the European Renaissance. Second, state-owned enterprises (SOEs) are core national economic development tools. Just as it is necessary for a person to develop their arms and legs if they want to become stronger, SOEs, serving as a country's limbs, enhance its strength as they develop.

Wen noted that state-chartered enterprises were established in early European countries in order to promote economic growth, such as the East India Company and West India Companies established in countries like Holland and England, and that they even allowed the organizations to maintain armed forces in their colonies. In the early stage of the Japanese industrialization, SOEs were also used to promote economic development. The second secret of European countries' early industrialization is contained in the great contribution that state-chartered enterprises. SOEs also play an important role in China's development. Neither the country has ever had any colony nor did it rely on slave and drug trades accumulating capital, however. Its SOEs are not intended to replace private firms and instead make products and services available that the latter are slow to provide or unable to provide at all. The transportation, energy, and communication infrastructure and facilities that China's SOEs have built have helped power the country and contributed to the economic miracle that it has experienced.

Third, encourage market economy and non-state-owned enterprises. Since the Industrial Revolution started in the 18th century, various industrial and commercial enterprises have gradually replaced farmers as chief players of the societies. While making profits, these private firms also provide society with capital and consumer goods, employment opportunities, and tax revenue for state. In addition, in the contemporary international competition, whether a country has agglomerations of strong high-tech firms is the main indicator of its international political and economic competitiveness. Improving the market mechanism and encouraging the development of non-state-owned enterprises have become the model of contemporary national development.

Fourth, institutional arrangements are made in response to the demand of social, political, and economic development rather than the other way around. Wen found that the various institutional arrangements that were made during the process of industrialization in European countries, the United States, Japan, and other areas arose in response to the requirements of economic development and that the technological progress and economic prosperity experienced by the West did not derive from the pre-existed "liberal democracy and rule of law" as claimed by the new institutional economics.

Various institutional arrangements have been established and improved according to the needs for social, political, and economic development after the PRC was founded, especially since reform and opening up were initiated in 1978. Rather than adhering to any borrowed doctrine, the country's philosophy is to "seek truth from the facts" mostly due to the fact that the Communist Party of China (CPC) found that the revolutionary cause suffered setbacks and failure when things were done according to dogma and that it was victorious and the economy developed successfully when policies and measures were formulated in a practical manner over the course of its long-term revolutionary practice.

Fifth, international political and economic competition is the core driving force powering a country's political, economic, and technological development. Wen highlighted the fact that European countries fought over 100 wars related to territorial expansion and other interests after the Renaissance, such as the Hundred Years' War (1337-1453), the Thirty Years' War (1618-1648), the First Anglo-Dutch War (1652-1654), the Second Anglo-Dutch War (1665-1667), the Third Anglo-Dutch War (1672-1674), the Fourth Anglo-Dutch War (1781-1784), the Nine Years' War (1688-1697), and so on. Governments established ordnance departments and state-funded Academies of Sciences in order to develop artillery and gunpowder during times of war. Famous Italian scientist Galileo was an artillery expert at the Ordnance Bureau of Florence; artists Leonardo da Vinci and Michelangelo were ordnance engineers; and chemist Antoine-Laurent de Lavoisier discovered the role that oxygen plays in combustion, which greatly improved gunpowder and led to the creation of modern chemistry at the French Academy of Sciences. It can be said that the frequent wars that occurred in Europe after the Renaissance led to scientific and technological revolution and that the application of the achievements of these revolutions to business led to the occurrence of the Industrial Revolution.

Sixth, building a thoroughly open society is a necessary prerequisite of economic development. A nation can develop properly only when the majority of its citizens become developed. China has empowered its citizens with land rights and other economic rights as well as access to public services in particular the education and medical care while it broadens opportunities for political participation and has made special efforts to benefit its hard-working rural citizens. The most thorough land ownership reform in human history was implemented when land belonging to landlords and capitalists was confiscated and distributed in equal amounts to the vast masses of peasants who had little or no land after the PRC was founded. The nation's urban and rural land was later nationalized and collectivized, respectively, as well. Large-scale infrastructure and industrial parks require large amounts of land and would, therefore, not be easy to build without state or collective ownership of the resource. Nine-year compulsory education and healthcare access also became available to all of the country's citizens as affirmative social service initiatives were implemented. Nobel laureate in economics Amartya Sen noted that China laid a foundation of human capital in advance of the economic prosperity that began to occur after it started the reform and opening up.

Last but not least, the core prerequisite of a country's economic development involves ensuring that strong central and local governmental structures dedicated to the well-being of the vast majority of its citizens are in place. Just as a capable person has a sharp mind and highly functioning brain, a nation must have an effective nerve center if it is to be successful – that is, a central government with an organizational structure and framework that is concerned with comprehensive social, political, and economic development that prioritizes the interests of the public and especially those of the working masses.

Wen found that during the warring period from the end of Renaissance to the end of the 19th century, countries whose resources and decision-making processes were gradually centralized tended to win wars and survive and those which remained decentralized tended to lose and disappear. The Chinese government devotes itself to "serving the public wholeheartedly" under the leadership of the CPC – a party with determination, unique ideology, and strict discipline and organizational structure that has honed its abilities while grappling with challenges such as long-term domestic revolutionary wars and international anti-aggression wars alongside the People's Army that it commands. China was able to head off the threats posed by the Korean War (1950-1953), Sino-Indian Border War (1962), and Vietnam War (1964-1973), and helped secure a peaceful environment for itself under the CPC leadership.

Governance is often weak in developing countries, however. Loosening government regulations in accordance with neoliberal economic dogma can undermine political and economic governance and impair economic growth and development.