2021 Graduation Ceremony of NSD and ISSCAD 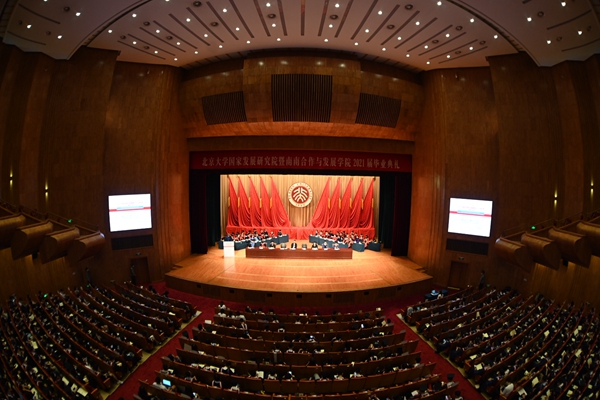 The first section of the graduation ceremony each year is a group photo. Nearly one thousand graduates from undergraduate economics, undergraduate economics double degrees, masters, doctors, and MBA and EMBA of BiMBA Business School, as well as Doctoral and Master graduates of ISSCAD, gathered at the Centennial Lecure Hall. After the students took a group photo with the team of professors who were present in their gowns, they entered the hall to participate in the graduation ceremony. 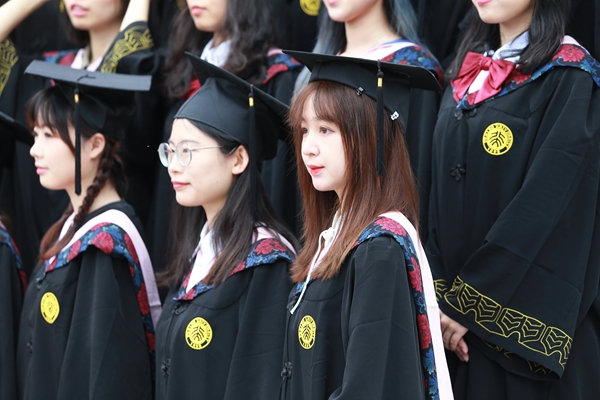 At 8:30, a team of professors and researchers from Peking University NSD and ISSCAD entered the stage amid warm applause. Special guest speaker Mr. Liu Yonghao and representatives of student graduates also took their seats in the hall. Then the graduation ceremony of 2021 was officially commenced. 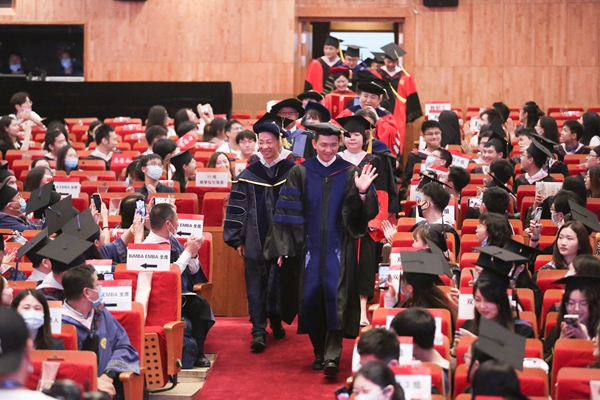 After a brief opening, Professor Huang Yiping, Deputy Dean of NSD, asked everyone to stand up and sang the National Anthem together, and then chaired the graduation ceremony. 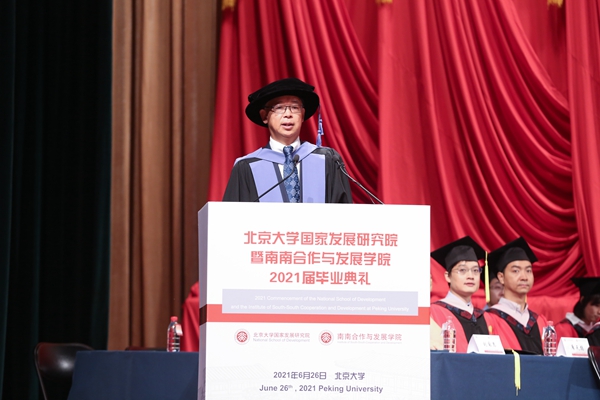 2021 Graduation Ceremony Speech of the National School of Development

The host Prof. Huang Yiping invited the Dean of NSD, professor representatives, graduate representatives, and special guests to give speeches in turn. Professor Yao Yang, Dean of the NSD and Executive Dean of ISSCAD, first extended his warm congratulations to all graduates and gave a speech on the theme of "Finding Your Unique Potential". Professor Yao Yang talked about the social status quo, which is highly summarized by the two popular vocabularies "involution" and "lying flat", especially the young people’s choice of simply "laying flat" trapped by the high pressure of competition. The fundamental way out of "involution" is for young people to find their own unique potential and fully realize their potential. Professor Yao Yang said that for students at Peking University, being a scientist, economist, entrepreneur or politician is a success, and raising pigs and giving talk shows are also successful. The difference between Peking University students is that they strive to be excellent in all walks of life. 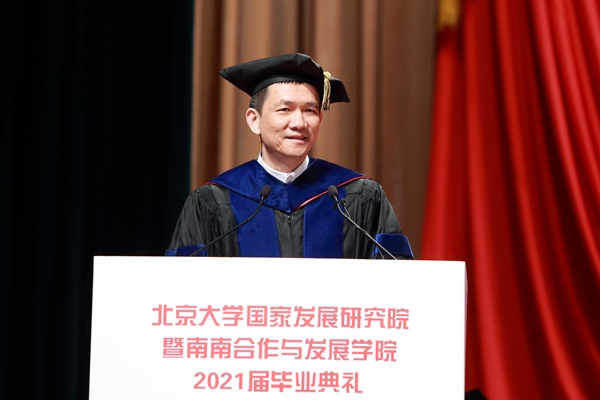 In the session of the professor representative speech, Professor Liu Guoen, Director of the Academic Committee of NSD and Dean of the Institute of Global Health Development of Peking University, selected two topics-"Professor-student relationship in my view" and "The orientation and cultural elements of national development", to share with everyone. The graduates received the heartfelt advice. Professor Liu Guoen said that the professor-student relationship he wishes to build is "one day as a professor and a lifetime as a friend", because this is in line with the principle of equality between professors and students, and it is also the inevitable reality of the progress of human civilization. He recalled discussing the development orientation of the school with Professor Yao Yang eight years ago. He was convinced that national development research should review the entire history and be broad in perspectives. The revitalization of the Chinese nation should continue to open-up and evolve, and more importantly, to regain traditional culture. He pointed out that the essence of Chinese traditional culture, like the term “junzi” can cross national boundaries and transcend time and space. And if everyone practices such spirit, it will definitely benefit China to contribute to human progress and national development under globalization. 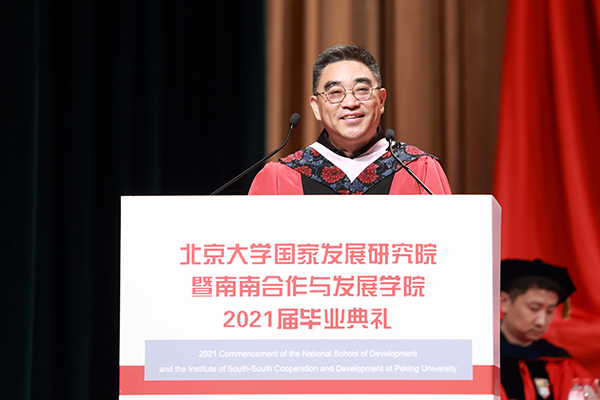 In the special guest speech session, Mr. Liu Yonghao, Chairman of New Hope Group, took the stage and briefly recalled the unforgettable memory of his five visits to Peking University before, and expressed his best wishes to all graduates. He said that everyone has already stood at the a high starting point graduating from Peking University. In order to run gracefully and lastingly in the marathon of life, he would like to give three life advices:

1. Graduation is just a new starting point in life and continuous learning is the secret of any long-lasting business;

2. Always insist on the things that are worth persisting;

3. Do your best to remain honest with others, yourself, and society throughout life.

After Mr. Liu Yonghao's speech, Professor Yao Yang presented him with a commemorative plaque for his speech at the graduation ceremony. 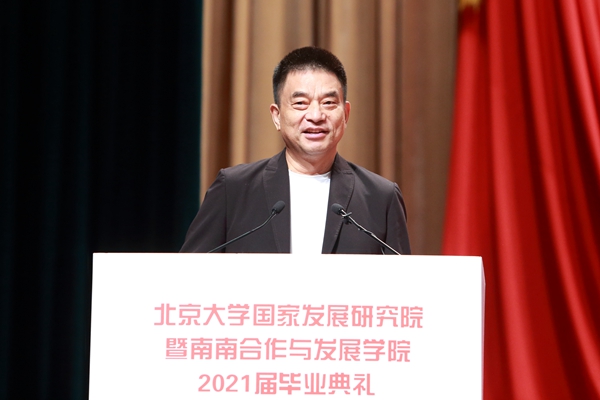 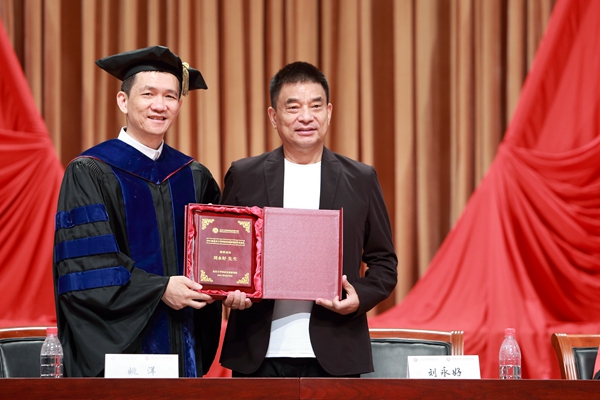 Professor Yao Yang first invited guests and professors of the graduation ceremony of ISSCAD to come on stage. They are: Deputy Director Zhang Maoyu of the National Agency for International Development Cooperation, Sun Zhonghe, Dean of the Institute of International Business Officials of the Ministry of Commerce, and Professor Lin Yifu, co-founder of NSD, Honorary Dean and Dean of ISSCAD and Dean of the Institute of New Structural Economics, Professor Fu Jun, Academic Dean of ISSCAD, and Dr. Zhou Rongguo, a graduate representative of ISSCAD.

Deputy Director Zhang Maoyu congratulated the graduates for their excellent results and thanked the professors for their hard work. He said that when the students graduated, the Communist Party of China has marked on its 100 years of establishment. ISSCAD has trained more than 200 high-end talents from more than 50 countries in the past five years. During the course of their studies, they overcame the difficulties of the COVID-19 pandemic and persisted in studying and were able to conduct their defense sessions smoothly. China has also assumed the responsibility of a major power and made great contributions in the global fight against the pandemic. I look forward to your family and country, apply what you have learned, and continue to write a new chapter of friendly cooperation. 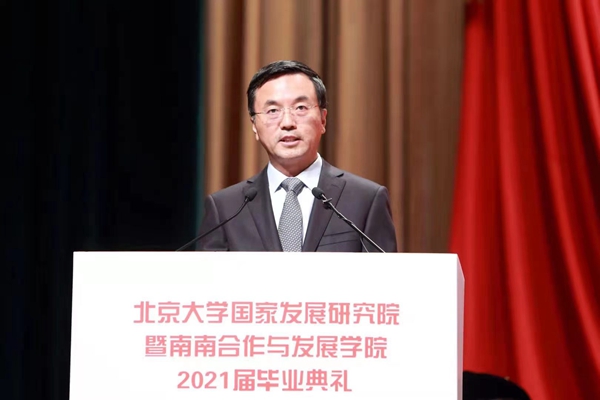 Dean Sun Zhonghe greeted and congratulated all ISSCAD graduates from 13 countries. He addressed the outstanding students of ISSCAD graduated on the 100th anniversary of the founding of the Communist Party of China and the 5th year anniversary of the founding of ISSCAD. In the past few years, everyone has been studying wholeheartedly, whilst China continuously promoted exchanges and dialogues among different civilizations and development models with practical actions. As senior government officials and elite talents of various countries, I hope you will apply what you have learned to help your country's development after graduation, and continue to pay attention to China as a pragmatic and friendly envoy of both sides, and make contributions to human civilization and development together. 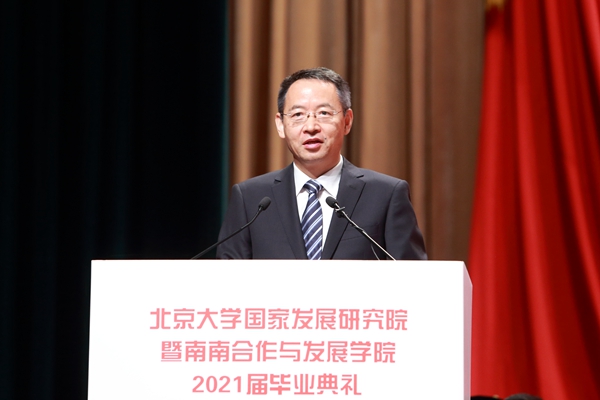 Professor Lin Yifu also gave a speech as a professor representative: The gains of years of hard work are the achievements that you should be proud of. I hope that you can use the theory of comparative advantage to guide your country to catch up with modernized developed countries and help your motherland realize your dreams. At the same time, I hope you can use what you have learned to help you and your respective mother countries participate in global cooperation and future development. Cross-regional international cooperation is the best way to deal with the challenge of deglobalization. In the future, you will surely achieve greater success, and we will take the lead in applauding it; you will also encounter challenges in the future, and we will forever be your true supporters. 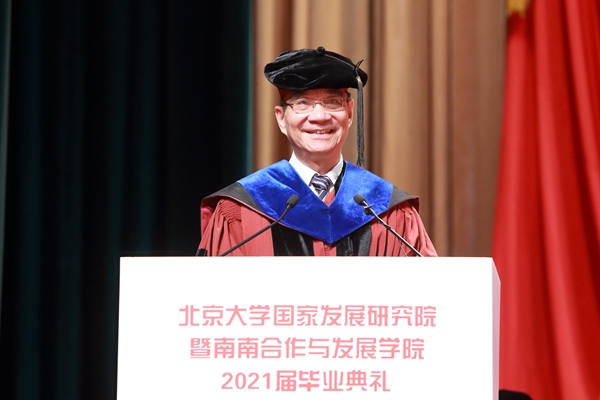 Dr. Zhou Rongguo delivered a speech as the graduate representative of ISSCAD. He recalled three years of study time and said that the students had shared the same purpose and had treated each other as a family, the professional teachings of the faculty are still vivid in his memory, and the field trips taken has complemented his learning experience in China. These three years have been three years of thorough refreshing of beliefs, ideas, and methods. He believes that the South-South graduates will continue to overcome difficulties. They will strive for a better life for the next generation, for the South-South countries and their people, and for the cooperation and development of nations. After the graduation speech of ISSCAD, Professor Yao Yang invited the guests and professors on the stage to leave the venue to prepare for the solemn degree-granting ceremony. In the process of changing the layout, music played, and the meticulously prepared graduation short film "The Days Passed Together", with pictures full of memories, brought everyone to reminisce about their youth, relive the beautiful years, and awaken the memory of walking into Langrun Garden for the first time. As the graduates were waiting in line with joy, Professor Huang Yiping announced the official start of the degree-granting ceremony of Peking University National School of Development and the Institute of South-South Cooperation and Development, and the degree-granting ceremony of each teaching project was carried out in turn.

The first is the Doctoral and Master's degree awarding ceremony of ISSCAD. Professor Fu Jun announced the list of 2021 Ph.D and master's graduates of ISSCAD. Deputy Director Zhang Maoyu and Professor Lin Yifu awarded certificates and degrees and take photos with the students. After which, the degree-granting ceremonies of 6 programs of the National School of Development , including doctoral, master, undergraduate, MBA, EMBA, and Economics double degrees, were successively carried out. In the doctoral degree awarding session, 10 doctoral graduate supervisors led the graduates to the stage one by one, and Professor Lin Yifu took a group photo with the supervisor and the student to commemorate. 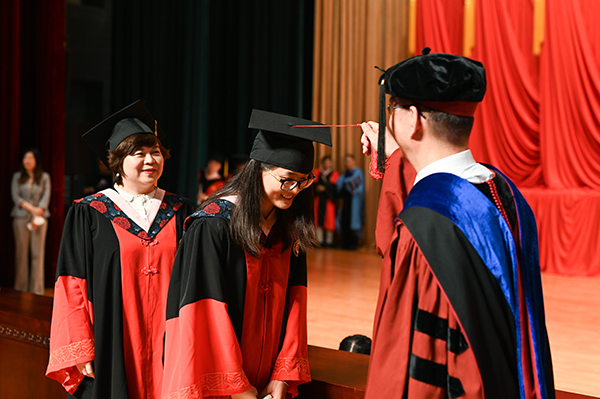 At the end of the degree awarding session, Professor Yao Yang invited all the professors to the stage and all the graduates to stand up and sing "Singing the Motherland" together. The bright and majestic melody is inspiring. 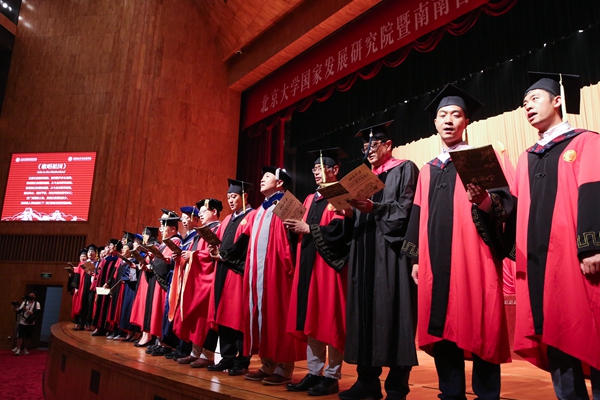 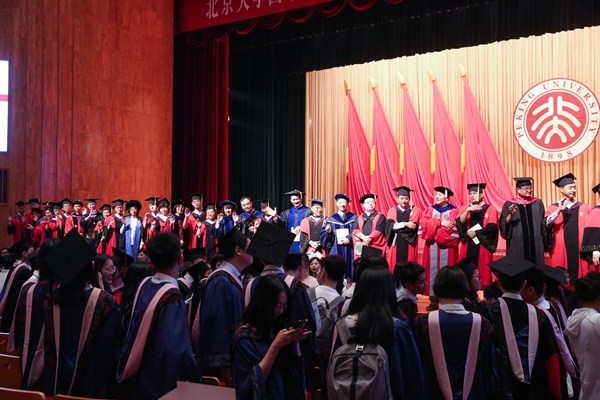 The last part of the graduation ceremony is the special project of NSD: the farewell ceremony. On parting, Professor Yao Yang said that he hoped that the students would take away the “love we shared on our family and country” and the culture of “harmony but difference” of the National School of Development , and love what they do in the new changing world, so that China, South-South countries, can together make the world a better place.

At this point, the 2021 graduation ceremony of the National School of Development and the Institute of South-South Cooperation and Development of Peking University has come to an end. We look forward to the 2021 graduates to bravely heading for a new future with the blessings and expectations of the school, with nostalgia and passion. After the ceremony, all the professors, researchers, faculty and volunteer team who organized the graduation ceremony took a group photo to commemorate this event. 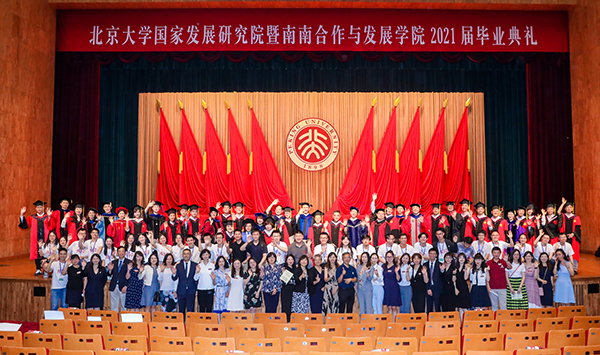 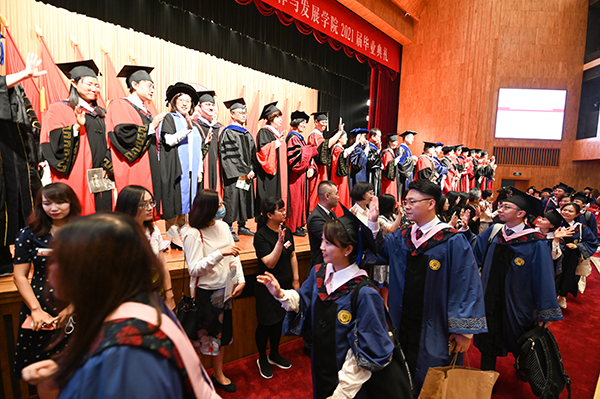