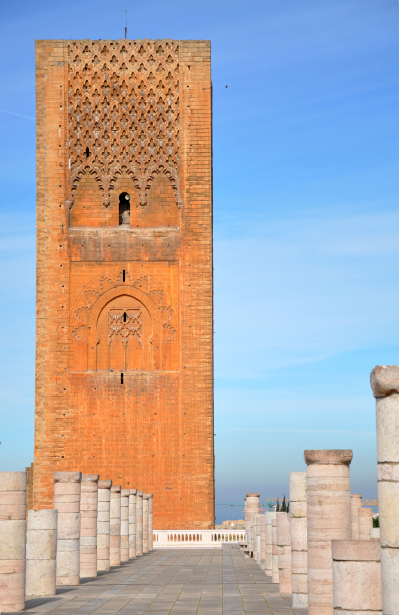 Anyone visiting Rabat, capital of Morocco and a city with rich historical heritage, is struck by the majesty of the Hassan Tower. This vestige dating from the Almohad Dynasty (12th century) consists of a minaret and a large prayer area with colonnades. With a height of 44 meters, today, this skyscraper of the Middle Ages is a testimony to the influence of Rabat and its past domination over a territory ranging from Spain to Tunisia. As a sign of its unusual altitude for the time, the monument is equipped with ramps rather than stairs, to allow the muezzin, responsible for issuing the call to prayer, to quickly reach the top, on horseback.

However, it is quite possible that the memory of future generations will incorporate another building equally impressive in terms of its size and engineering: the Mohammed VI Tower in Rabat. Indeed, on November 1, 2018, the King of Morocco gave the green light to the launch of the construction work of the tallest tower in Africa, with a target delivery date of May 30, 2022. With a height of 250 meters, this skyscraper will have 55 floors of offices and high-standard apartments, as well as an observatory for a total cost of around $420 million. Using the shape of a rocket on its launch pad visible from 50 km away, the building's architecture will fit elegantly into Rabat's new urban landscape, alongside the Grand Theater designed by the Iraqi-British architect Zaha Hadid.

As a sign of Morocco's commitment to sustainable development, the building's facades will be equipped with 3,500 square meters of photovoltaic panels, along with a wastewater recycling and rainwater recovery system. The tower will be able to claim LEED Gold certification, the highest international environmental standard. Particular care is also being taken to protect against earthquakes and the risk of flooding due to the proximity of the Bouregreg River. The objective, assures Othman Benjelloun, President of the holding company awarding the project, is to make the tower "the pride of the Kingdom of Morocco and the African continent".

The presence of the ambassador of China at the ceremony to launch the work on the tower was not fortuitous: it was because China Railways Construction Corp. International (CRCCI) is part of a consortium in charge of the project alongside the Belgian company BESIX and the Moroccan company TGCC (Travaux Généraux de Construction de Casablanca). CRCCI is the international arm of China Railways Construction Corp. (CRCC), a Chinese construction giant, which in 2020 ranked 54th on the Fortune Global 500 list, as well as the third-largest construction company in the world in terms of revenue. Active in all construction activities, this behemoth has its origins in the early days of the People's Republic of China, as the railway division of the People's Liberation Army of China, before being attached to the Chinese Ministry of Railways, and then to the State-owned Assets Supervision and Administration Commission. In this sense, CRCC has been involved in several Sino-African cooperation projects, including the construction of the iconic Tanzania-Zambia railroad. This international breakthrough reflects the dynamism of Chinese construction companies on the African continent, with a market share of 61.9 percent in 2019. The attractiveness of these companies is not limited to the provision of Chinese public funding, which only accounts for 30 percent of revenues on average. They also have a large share coming from multilateral development banks or the private sector. This is the case of the Mohammed VI Tower in Rabat, whose financing comes entirely from private funds.

An African group focused on China

The Mohammed VI Tower project in Rabat is led by the private Moroccan holding company O Capital, which is distinguished by its African presence as well as by its cooperation projects with China.

In the financial sector, the group's Bank of Africa subsidiary is one of the largest pan-African financial players, with a presence in 35 countries, including 23 in Africa, 15,200 employees and 6.6 million clients. It is also one of the very first African banks to take an interest in the Chinese market, with the opening of a representative office in 2000, followed by a branch in Shanghai in 2019. Through this expansion, the group aims to become a cornerstone in Sino-African trade relations and one of the main clearing houses of the renminbi in Africa. It is also with this in mind that an alliance was sealed with the China Africa Development Fund (CADF) during the official visit of King Mohammed VI to Beijing in 2016 to jointly invest in the public and private debt market in Africa.

O Capital Group is also the main promoter of the Mohammed VI Tangier Tech City project. In partnership with the Chinese giant China Communication Construction Company, this industrial city plans to host more than 200 Chinese companies, mainly from the automotive, aeronautics and textile sectors, with an investment of $10 billion over 10 years.

This resolutely Sinophile positioning is undoubtedly supported by Benjelloun, the president of the holding company. He discovered the appeal of the Chinese market more than 50 years ago, during a long visit that led to an automobile sales contract with China. This interest is reflected in the very name of the holding company, O Capital, which borrows from the open "O" or Japanese "enso," itself derived from the Chinese "wu," a symbol of Asian serenity and elegance.

To date, construction work on the Mohammed VI Tower in Rabat is progressing at a steady pace (32 floors completed), suggesting that it will be delivered on schedule and thus open up a new era in the urban planning of the Moroccan capital.