Since its commercialization after the Second World War, plastics has become a ubiquitous material in our lives due to its attractive features of durability, light weight, flexibility and low cost. However, unmanaged plastic waste has caused an ecological, human health and economic disaster. Marine animals ingest plastic and microplastic or trapped by abandoned nets. Our health is harmed by the plastic that enters our bodies through the food chain and the worsening sanitation conditions in cities and countryside alike. Fishery and tourism are directly affected.

According to the Breaking the Plastic Wave study by Pew Charitable Trust and Systemiq published in 2020, if we continue the current trend, the annual flow of plastic waste into the ocean will have increased from 11 million tons in 2016 to 29 million tons by 2040. What does “29 million tons” mean? Imagine the entire coastline of the world, and then imagine for each meter of coastline 50 kg of plastic waste will be going into the ocean every year by 2040. That is a future we need to avert.

Marine plastics has no national boundaries, but we can prioritize progress in countries and industries that contribute the most to this global problem. In terms of geographic distribution of plastic leakage into the ocean, middle-income developing countries with large coastal populations and low capacity for solid waste management rank on top, namely China, Indonesia, the Philippines Vietnam, Sri Lanka, Thailand, Egypt, Malaysia, Nigeria, Bangladesh (Jenna R. Jambeck, 2015). Reducing the use of single-use plastic packaging, improving the collection, recycling and managed disposal of plastic waste in these countries is key to reducing marine plastics. 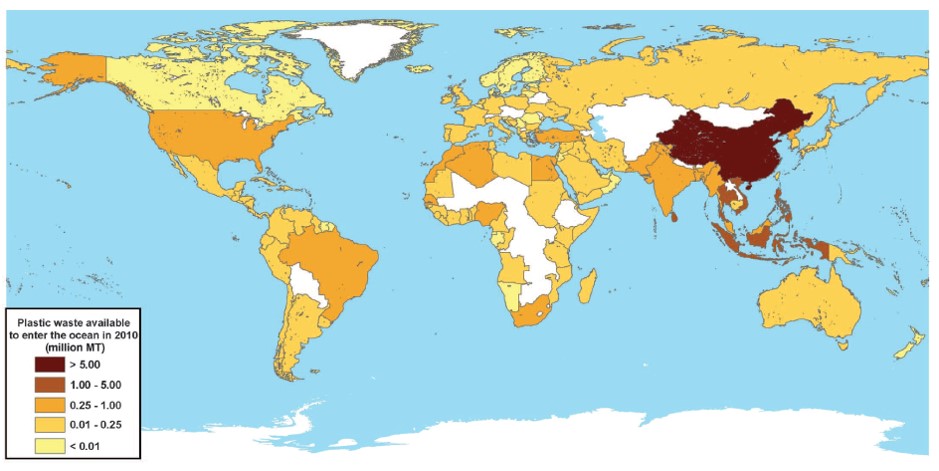 But investing in solid waste management alone is not enough. Globally, the speed of building waste management infrastructure and delivering services is far outpaced by the growth of plastic production and waste. Currently, two billion people do not have waste collection services. Municipal governments around the world are already overwhelmed by the amount of solid waste (esp. plastic waste) they have to manage. After China banned the import of recyclables and waste in 2018 and subsequent bans of other Southeast Asian countries, municipal governments in developed countries that used to export the problem now have to find domestic solutions.

Policies need to provide incentives for producers to reduce virgin plastic production and adopt designs and business models that help us build a circular economy. What does it mean concretely?

Our first priority should be flexible packaging (bags, films, pouches, etc.) and multi-layer and multi-material plastics (sachets, diapers, beverage cartons, etc.). Among all the plastic types, they are the most susceptible to leakage. Even though they account for 59% of plastic production, they contribute to 80% of plastic leakage. (Pew Charitable Trusts and Systemiq, 2020). Policies need to stimulate innovations by the fast-moving consumer goods and retail businesses in the way they design and package products.

In 2019, Unilever made a commitment that by 2025 it will a) halve the amount of virgin plastic used in its packaging and achieve an absolute reduction of more than 100,000 tons in plastic use; b) help collect and process more plastic packaging than it sells; c) ensure that 100% of its plastic packaging is designed to be fully reusable, recyclable or compostable; d) increase the use of post-consumer recycled plastic material in its packaging to at least 25%. Hard targets generate innovations in material choice, product packaging design, a new reuse and refill business model.

Widespread innovations are needed. Government can stimulate such innovations by making companies bear the environmental cost of their products. Since early 1990’s, countries in Europe and North America have adopted a policy strategy called Extended Producer Responsibility (EPR). Originally coined by Thomas Lindhqvist in 1990, EPR extends the responsibilities of the manufacturer of a product to the entire lifecycle of the product and especially for the take-back, recycling and final disposal of the product.

EPR implementation started in Germany in 1991 when it adopted the Packaging Ordinance. Firms pay annual license fees to an industry consortium, which manages a separate waste management stream for their products. Variable fees are assessed based on materal type and weight. Members use a Green Dot label on their products to indicate they have contributed to the cost of collecting and processing waste. Germany achieved 3% annual reduction in packaging between 1991-97, as compared to 2-4% annual increase prior to the ordinance. EPR has since spread to other European countries and beyond. EPR legislations differ across countries and local governments within a country, and efforts are underway to harmonize the EPR framework in order to reduce compliance cost for business.

Developing countries also need to make polluters pay, whether they are the businesses with the most environmentally damaging products or consumers who generate a lot of waste. Beyond the lessons we learn from developed countries, what can the developing countries learn from each other that is directly relevant for their context of rapid urbanization and overwhelming challenge of managing solid waste? Solid waste management costs about 19% of municipal budget in low-income countries, 11% in middle-income countries, and 4% in high-income countries (Silpa Kaza, 2018). A capital-intensive approach is often neither feasible nor desirable in the context of revenue-poor municipal governments. Many developing countries have a sizable informal sector of waste pickers who are turning waste into economic livelihood. It is estimated that 60% of global recycling is done by 11 million waste pickers around the world. South-south learning can study how to incorporate the role of waste-pickers into policy and program design. For example, how to support waste picker cooperatives and facilitate their access to predictable sources of waste as well as buyers of recyclables and protecting these workers from workplace hazards.

A public-private partnership between the Pune Municipal Corporation in India and a waste picker cooperative called SWaCH demonstrates a win-win partnership. In 2008, SWaCH signed a MoU with Pune Municipal Corporation (PMC) to collect source-separated waste from households, businesses and institutions, charging them user fees, sorting them in the sheds provided by PMC, depositing the waste at designated collection points, and selling recyclables and keeping the revenue. Covering 60% of the areas in the city and more than half a million households, this arrangement saved the PMC $7.9 million a year and diverted 9% of waste to recycling.

While plastic waste is predominantly an urban issue in developed countries, most developing countries are facing the plastic waste challenge in rural areas as well. 45% of today’s leakage is from rural areas. With a large clientele with low income and limited cash flow, producers of fast-moving consumer goods sell their products in small single-use plastic packaging, which is often found littering in nature after use. South-south dialogues can facilitate learning about inducing behavioral change in this context and establishing affordable infrastructure for collection, recycling and disposal in less densely populated areas.

China needs to do more as the largest emitter of plastic waste into the ocean, the largest plastic producer and a large trading partner. Whether we like it or not, a global movement such as the Break Free from Plastic Movement is building. Our trading partners in Europe and North America will ask our export companies to adopt greener design and packaging. The current wave of city-level effort in sorting and recycling waste is a good start. And we need to go beyond administrative measures such as ban and experiment with a variety of policy instruments such as tax, charges, tradable permits. We need EPR for the packaging industry and green innovations by businesses.

As research and teaching universities, we can build a global research and learning networks to accelerate global progress and to nurture the next generation of leaders. 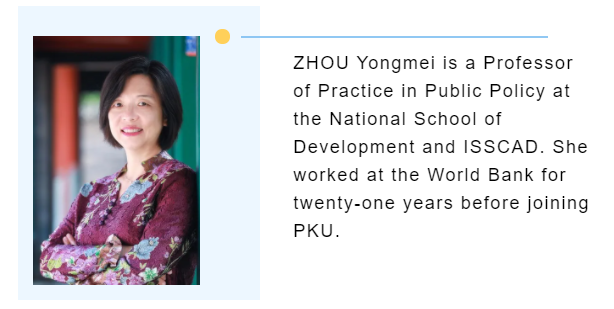