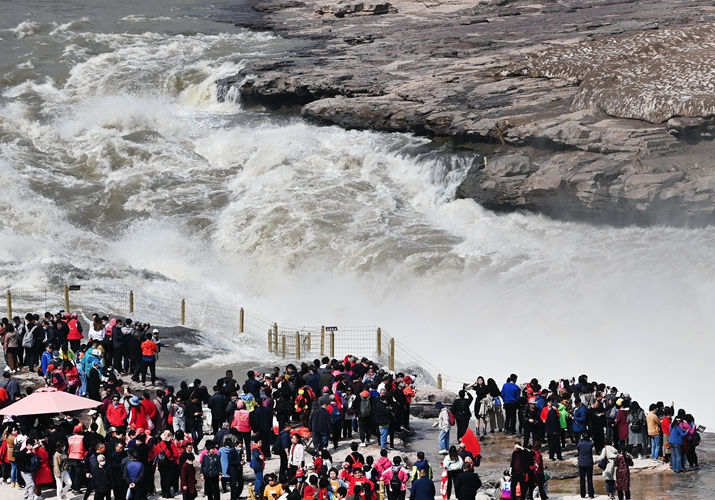 A section of the Yellow River, the cradle of Chinese civilization, in Shaanxi Province on April 12(XINHUA)

Western scholars often refer to China's political system as "dictatorship," "autocracy" or "authoritarianism" while the Chinese call it a centralized power system or a system of prefectures and counties.

Some Western scholars argue that liberal democracy would lead to prosperity and strength, and dictatorship would result in the failure of the country, with the economy collapsing and the people struggling to make a living.

However, for a long time in history, China was the most powerful country in the world. For such a civilization country, the terms used by Western theorists to judge China, such as dictatorship, autocracy or authoritarianism, cannot summarize the main characteristics of the country.

Similarly, the labels used by Chinese theorists such as a "centralized power system" or a "system of prefectures and counties" may also not answer the question of "what kind of country is China" properly. To understand what China is from a philosophical perspective, we need to go back to the origins of the Chinese civilization and analyze and generalize in depth its political, economic, social, cultural and historical development route. Only then can we comprehend the philosophy of China and its political economic implications.

The need for collectivism

Both the Yangtze River and the Yellow River originate from the Qinghai-Tibet Plateau, flow through China, and finally merge into the Pacific on the eastern coast of China. The annual flooding disasters of the two rivers made it vital for China to have a strong leadership to mobilize and coordinate the various tribes to fight the flood.

Similarly, the frequent northern nomadic incursions forced the regime of the Central Plain in China to establish a standing army to defend the border. Encountering floods and invasion, no one could survive without depending on the country, or the collective, which was the fundamental reason for the creation and existence of a collectivist China.

Collectivist China experienced the feudal system of the Western Zhou Dynasty (1046-771 B.C.), the separatism of the vassals during the Spring and Autumn Period (770-476 B.C.), and the Warring States Period (475-221 B.C.), and finally moved toward a centralized power system or the system of prefectures and counties in the Qin (221-207 B.C.) and Han (206 B.C.-A.D. 220) dynasties. This political system has continued in modern China.

In order to enhance collectivist China, various dynasties of China carried out the construction of an open society. The Qin Dynasty abolished the enfeoffment system in order to implement a centralized power system. That is, the emperor directly appointed imperial officials at high levels to replace the hereditary aristocracy.

To expand the sources of government officials, the Western Han Dynasty (206 B.C.-A.D. 25) allowed government officials and the gentry to recommend candidates to the emperor. However, the inspection and recommendation system eventually degenerated into a tool for a number of wealthy and powerful families to control the appointment of state officials. These families became the de facto hereditary aristocracy, and the inspection and recommendation system evolved into a disguised aristocratic hereditary system.

After the fall of the Eastern Han Dynasty (25-220), China fell into a state of dismemberment for almost 400 years, until the Sui Dynasty (581-618) unified the whole country. To prevent the appointment of state officials from being dominated by a number of eminent families, Sui rulers pioneered a more open and competitive imperial examination system. Therefore, collectivist China was supplemented and strengthened by improved openness and meritocracy.

To control floods and resist nomadic incursions more effectively, collectivist China needed a unified ideology for the entire country compared with other civilizations. As early as the Spring and Autumn Period, Confucius advocated restoring the Zhou rituals, that is, returning to the state where there was only one leadership in the whole country.

Under the reign of Emperor Wudi (156-87 B.C.) of the Western Han Dynasty, Confucianism was adopted while other schools of thought were ditched. Hence, Confucianism gradually became the core doctrine of the Chinese imperial examination system and the core ideology of the whole country.

From the Qin and Han dynasties to the late Ming (1368-1644) and early Qing (1644-1911) dynasties, China was one of the most powerful and developed countries in the world in terms of political civilization and economic development.

After a series of reforms, China's institutional construction improved. However, the patrimonial system in Chinese dynastic politics still resulted in child or weak emperors without any administrative experience and poor state governance, which in turn caused imperial power to fall into the hands of vested groups or eunuchs, and even the collapse of some dynasties.

In addition, the imperial examination system took the Confucian classics as its core content and neglected natural sciences and engineering. Because of this, since the late Ming and early Qing dynasties, China began to fall behind in science and technology, as well as in industrial and economic development, particularly after the West started Industrial Revolution in the 18th century.

Due to its outdated education, technology, industry and economy, China was humiliated by the West and Japan through the First Opium War (1840-42) till the victory of the Chinese People's War of Resistance Against Japanese Aggression in 1945. During this period, China also changed from dynastic politics to party politics, and from a patrimonial system to an open system where the country's top leaders were selected based on meritocracy.

The country's political, economic, social and cultural system was also reconstructed after the People's Republic of China led by the Communist Party of China (CPC) was founded in 1949.

The core purpose of the CPC is to serve the people, paying special attention to the toiling masses. This is the most collectivist declaration of openness and inclusiveness. To this end, a series of more thorough and open political, economic and social institutional arrangements have been established, such as the abolition of private land ownership, and the establishment of a nine-year compulsory education system, public medical services and other public services.

The reform and opening up, started in the late 1970s, greatly accelerated the construction of an open society, allowing free flow of labor, the establishment of non-state-owned enterprises, investment by foreign-funded enterprises, and proactive integration into economic globalization. The rapid advancement of the open society enabled collectivist China to successfully realize industrialization in about 40 years of reform and opening up, surpassing Japan to become the world's second largest economy in 2010.

China's anti-imperialist and anti-aggression history since 1840 implies that only by maintaining a strong political, economic, social and cultural environment, can it remain invincible in international political and economic competition. The history of Chinese civilization since the three great rulers, Yao, Shun and Yu, demonstrates that China must hold on to its core of collectivism and strengthen this through open institutional construction. In other words, collectivism and an open society are the essential elements for China to remain strong.