Peking University, June 11, 2021: A recently-announced “three-child” policy won’t prevent a long-term trend toward lower annual births in China, and the country will struggle to raise the retirement age by more than a couple of years by 2025, an influential Chinese economist said. “I don’t think we can drastically raise the birthrate,” Yao Yang, dean of the National School of Development at Peking University, said in an interview. The government’s move to allow families to have three children could lead to a short-term increase in births, but “we cannot expect the effect to continue for a long time,” he said.

“We’d better prepare for an aging society,” said Yao, one of a group of economists who consulted with President Xi Jinping and top economic official Liu He last year. “That is the destiny of East Asian societies.”

Yao said that despite an aging population, rising productivity could sustain the economic growth rate close to its potential of 5.5% to 6% over the next decade. China should maintain high levels of investment in urbanization, education and research, he added.

“Other people say investment should not be a driver for China’s growth,” he said. “I don’t agree with that. China still needs capital.”

To slow the pace of a decline in its workforce, Beijing has announced plans to “gradually” raise the national retirement age -- currently one of the lowest in the world at 50-55 for women and 60 for men -- in the next few years but has not given a timetable. There is an added urgency to the reforms as China experienced a baby boom in the 1960s, and that cohort is already reaching retirement age, Yao said.

Retirement reforms could be slow though, Yao said, adding that he didn’t think the government will raise the retirement age too much because of “social resistance.” One “realistic” option would be to raise the age by an average of six months a year over the next five years, resulting in a 2.5 year increase by 2025, Yao said. By 2030, the retirement age for men and women could be five years higher than current levels.

China’s plan to introduce property tax legislation by 2025 could help local governments’ finances. Nationwide taxes are likely to be collected by the central government but available for spending by local governments, who are currently heavily reliant on land sales for income, Yao said. “Property tax is going to compensate for local governments loss of income through land sales because they are quickly running out of land and need a replacement,” he said.

The tax would cool house price growth. “We’ve got to find a way to curb the crazy growth of property prices. And a progressive property tax is a way to do that,” he said.

Pension funds are sufficient for the near-future, but can be supplemented by transferring assets from state owned enterprises, which have a current net value of about 85 trillion yuan ($13.3 trillion), Yao said, citing official statistics. “That’s more than enough, we can just sell off those state assets or transfer them to pension funds gradually.”

The impact of population aging is likely to be deflationary. “An aging society means deflation, not inflation. The interest rate will (tend to) go down to zero, like in Japan.”

Consumer spending can continue to expand rapidly despite an aging population. Yao cited estimates by researchers at the National School of Development that over the next 30 years the positive effect of urbanization on consumption will be more than three times larger than a negative effect caused by population aging and a decline in the size of the total population.

Birth restrictions could be dropped entirely in the next decade. “Personally I believe China should get rid of family planning policy. That could happen in the next 5-10 years,” Yao said. 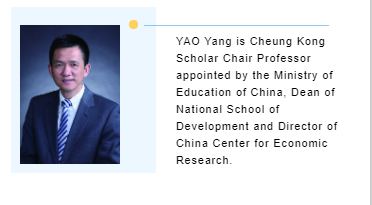